On June 13th I traveled to Ottawa to support our good friends Brian and Sue Parsons in the Ottawa Walk for ALS.  I was also walking in support of Robert McDonald who sadly passed away last year after his own battle with the disease. I wanted to share details of the trip with friends, family and work colleagues who were so generous donating to the cause.  Also with members of the McDonald family who were so kind in offering their support.\r\n

I was proud to be a part this event. It turned out that the $3,000 contributed by my supporters was just the amount we needed to “push us over the line” and make Team Parsons #1 in Canada for the second year in a row with over $53,000 raised.  Brian and Sue also hold the “all-time” fund-raising record in the Canadian walks for ALS.

Brian learned a little over two years ago that he had ALS – a disease little known to me at the time.  After a few minutes Googling to learn about Bulbar ALS (what Brian has and the most aggressive form of the disease) the enormity of what our friends were up against became clear. We could never have imagined this.\r\n\r\nIt was the spring of 2013 when Brian first e-mailed Michelle and I with the shocking news. The reason for the e-mail Brian later explained was that the emotions are intense. It is just too hard to have one-on-one conversations with everyone to explain that you”re dying and have at most a few years to live.  Also, even in those early days of the progression of the disease, Brian was having difficulty speaking.\r\n\r\n

Within a short time Brian and Sue picked themselves up from this devastating news as few could, and started organizing many a family trip including “Hangover 4” – A wonderful junket to Las Vegas that many friends of Brian participated in during the Fall of 2013. So many great trips and memories were compressed by the Parsons into just two years –  It’s safe to say that if U2 was playing a concert somewhere, Brian and Sue were there with amazing support from their families and friends.

Our friends, the rock stars 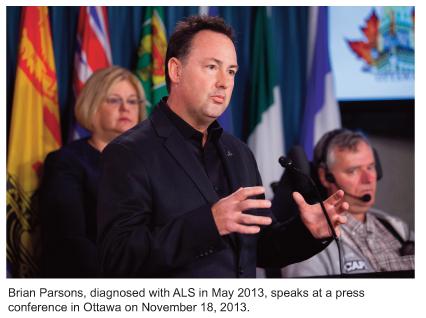 When people are talented, it’s hard to keep them down. Brian and Sue are special people – the kind that gain strength in the face of adversity.

This is a longer story than I can tell here, but Brian went on to apply his considerable talents as a former Liberal staffer on Parliament Hill to being the most effective advocate for ALS that Canada has ever had. If you Google “Brian Parsons” you will find countless articles about his success as a fundraiser, advocate and spokesperson on behalf of families with ALS and other terminal illnesses. I’ve included a pointer to a CBC interview filmed below. The tragedy of ALS as Brian explained is that ALS does not have a celebrity advocate similar to Michael J Fox supporting Parkinson’s disease. ALS is too aggressive, and people most often pass on before they can organize and make a difference. This is part of why Brian’s energetic efforts have made such a difference.

While doing all the right things by their family and friends, Brian and Sue became laser focused on the issue of the compassionate care benefit in Canada. I confess I really didn’t understand the significance of what they had achieved until I saw Brian receive a “rock star” welcome in the auditorium at the Canadian War Museum last week, the launching point of the Ottawa walk for ALS .

This standing ovation is the only point where I saw Sue tear up all weekend. Clearly an important cause, and as a subsequent interview below shows, Sue has been the pillar of strength making much of this possible. Brian and Sue have become celebrities among the close circle affected by this horrific disease.

The change in Canadian law that Brian and Sue helped bring about not only families with ALS, but all terminal diseases. It extends benefits from six weeks to six months in the final year of life. While Brian and Sue are recognized for what they done in the ALS community, I expect that families stricken by other terminal illnesses will never know who they have to thank. Long after Brian is gone, families will benefit from the changes Brian and Sue fought for during their darkest days.

The Walk for ALS

\r\nIt was fun and a little bittersweet to visit Ottawa again – kind of like going home. When I was in grade 8 our family lived on the Ottawa River not far from where the walk took place. Michelle and I met in Ottawa, and we lived there from the time we were married in 1990 until we moved to the Toronto area in 2000.  We worked together downtown a few blocks from Parliament Hill.\r\n\r\nOn the Friday evening before the walk, Brian and Sue hosted a get together at their home in Kanata. Brian is struggling more with the symptoms of the disease now – eating and swallowing is a challenge and his ability to speak is almost completely gone. Sue worries about his weight and kindly cooks him soft foods that he can now only eat with effort and only when standing up. Despite this,  Brian has the most amazing sense of humor and I was impressed by Brian and Sue both – being in good spirits and welcoming friends warmly into their home.\r\n\r\nMake no mistake though – things are tough. Brian fractured his skull a few weeks ago, startled by a firework that got too close. He has lost much of the mobility in his arms affecting balance, and the danger is that if he loses his balance he can no longer catch himself when he falls. Despite this, Brian was joking about being in rehab following his skull fracture where he hoped to meet Lindsay Lohan. I came to understand that spouses are the real heroes for people suffering with ALS. Sue plays an increasingly large role helping Brian perform day to day tasks.\r\n

\r\nIn case you missed the reference above, Brian and Sue are voracious U2 fans, and their lounge in the basement is full of posters that include shots of family members on stage with Bono. The Saturday of the walk, U2 were doing a concert in Montreal, and being two hours from Ottawa, this was a “can”t miss event” for the Parsons clan – Brian, Sue, Sean and Emily and twenty of their closest friends and family planned to race to Montreal just after the ALS walk on Saturday.\r\n\r\nOn Friday, Brian learned that Bono planned to be on Parliament hill the following Monday to meet with Canada”s leaders, tagging onto his Montreal concert. Bono of course is a noted philanthropists who regularly lobbies governments around the world to do what is right. I watched in amazement on Friday as Brian decided that he was going to crash that meeting with Brian Harper and other leaders (Canada”s prime minister) and meet Bono on Monday  (more below).\r\n\r\n

\r\n\r\nAfter a rainy Friday we all awoke to a picture perfect Ottawa morning. I headed downtown early, parked at my old spot where I worked downtown and walked down to the river. I was blown away by all the people volunteering their time to prepare for the event and support families with ALS. On registration, I wish to make it known that I contributed the $50 gift certificate due to those raising over $1000 back to the cause. 🙂

\r\nFew of the 1,000 or so people in the walk attended the session with dignitaries, but Team Parsons were there in full colors. It was good to hear from the many guest speakers, Ottawa”s deputy mayor, and Canadian members of parliament. I found myself impressed by the quality of the people who ascend to hold public office. It”s easy to throw stones at politicians as we all do, but to see people giving up their Saturday morning, sincerely interested in the cause, and taking the time to be informed and speak eloquently on the issues shows what these people are really about.\r\n\r\nThe talk by Carol Skinner who led the walk this year was especially touching.  Brian played the same role last year leading the walk and delivering a speech. It was gratifying to hear Carol give a shout out to Brian and talk about the impact that the compassionate care legislation was making in the families of all present for the ceremony.\r\n\r\nIt”s easy to be cynical these days about charities and fundraising and wonder where the money is going, but I was also impressed by ALS Canada. ALS Canada”s CEO (Tammy Moore) traveled also on a weekend to be personally a part of the event in Ottawa. Brian introduced me to her briefly. For her and other ALS Canada staff, this is clearly not a job – it is their passion. Unlike other charities, it is easy to “follow the money” and ALS Canada are admirably transparent. See the link here – http://www.charityintelligence.ca/charity-details/610-als-society-of-canada . The specialized and expensive equipment that people suffering from ALS so desperately need was visible at the event in abundance. The appreciation from families is obvious. ALS Canada runs programs with 12% administrative costs. Trust me as someone who has worked for large companies – 12% is about as lean as it gets – especially considering the dual role of ALS Canada, advocating for the disease nationally while also delivering programs in Ontario. (There is no ALS Ontario and for this reason ALS Canada may be unique. The National body deals directly with affected families)\r\n\r\n 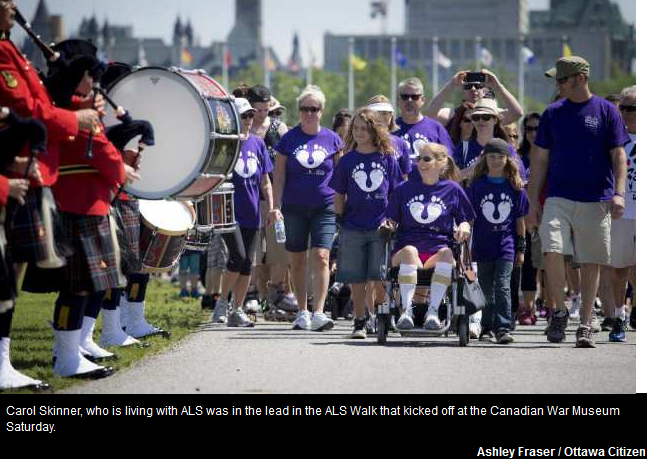 Photos above and below are from the Ottawa Citizen – http://ottawacitizen.com/news/local-news/more-than-1000-march-in-capital-to-raise-money-for-als-research. Walking by the highlanders piping so many families with ALS was very touching. Young kids were running while late-stage ALS patients were guiding themselves in wheelchairs. I don”t know where some of these people find the courage to do what they do. I got caught behind Brian by the Ottawa Citizen photographer who published the picture below.\r\n\r\n 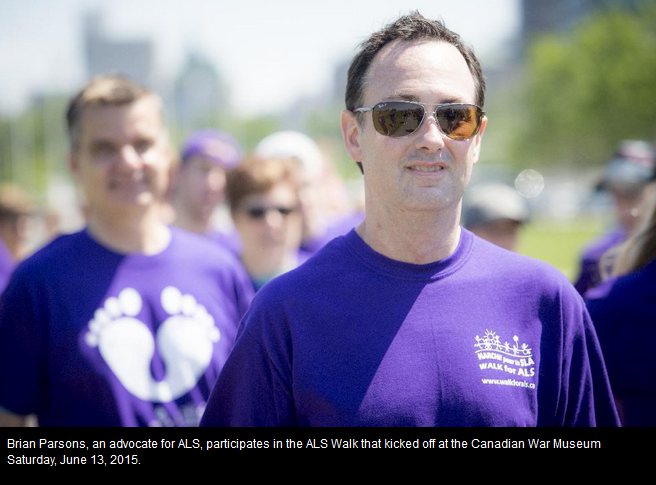 \r\nThis post is already way too long, so I need to omit photos from Brian and friends in Montreal, but it would be wrong not to include pictures of Brian and Sue with Bono on Parliament Hill. I think Brian and Bono are cut from the same cloth – both talented, both rock stars, and both wanting to do what”s right for other people. Bono knows the Parsons now – this is hardly their first meeting.\r\n\r\nBad practice to talk politics in a blog post, but I need to share that I”m just full of admiration for Justin Trudeau who shared his scheduled time with Bono to allow Brian and Sue to meet their hero. Justin”s words to Sue were simply that “Brian deserves it”. Justin did this simply because he thought it was the right thing to do. Bono personally invited the Parsons back to Montreal again to attend his Wednesday concert.\r\n\r\n 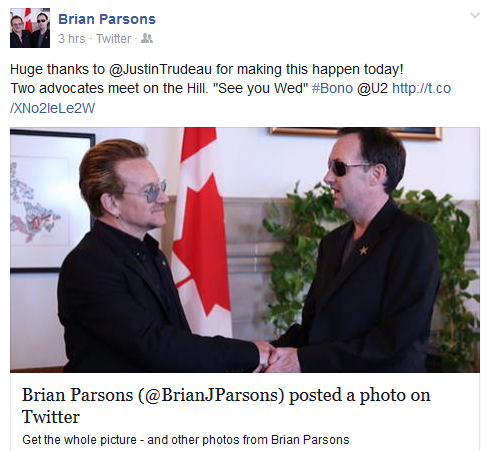 Anyway – the story is much richer than this, but this is all I can manage just now.\r\n\r\nOttawa is such a beautiful place – I took many other pictures of the weekend and the Ottawa walk for ALS that you can view below. I”ll continue to update and refine this post – thanks to all for supporting Brian”s cause.\r\n\r\n

View all posts by Gord